Let's eat some vegetables together, y'all!

As I was reading the subheading for this MIT Sloan Management Review article, my potential Halo Effect proximity alert was going off: Top Performers Have a Superpower: Happiness. A large-scale study found that well-being predicts outstanding job performance.

Here's where the researchers had a choice that risked involving the Halo Effect: do they build a sample of just the award-winners and then interview them to search for patterns? Or do they take a different approach?

If they built a sample of just the award-winners and then interviewed them, they would very likely get garbage results. They would be gathering memory-based data from people who won an award and benefited from that award and were involved in winning the award, and so those people's recollection of what they did that might have caused them to win the award will be suspect.

The researchers did not take that approach. They selected a sample and administered a happiness assessment to the entire sample. Then, 5 years later, they looked at which members of that sample had received a job performance award (and what kind of award).

Here's a drawing I made showing what's going on with the Halo Effect: 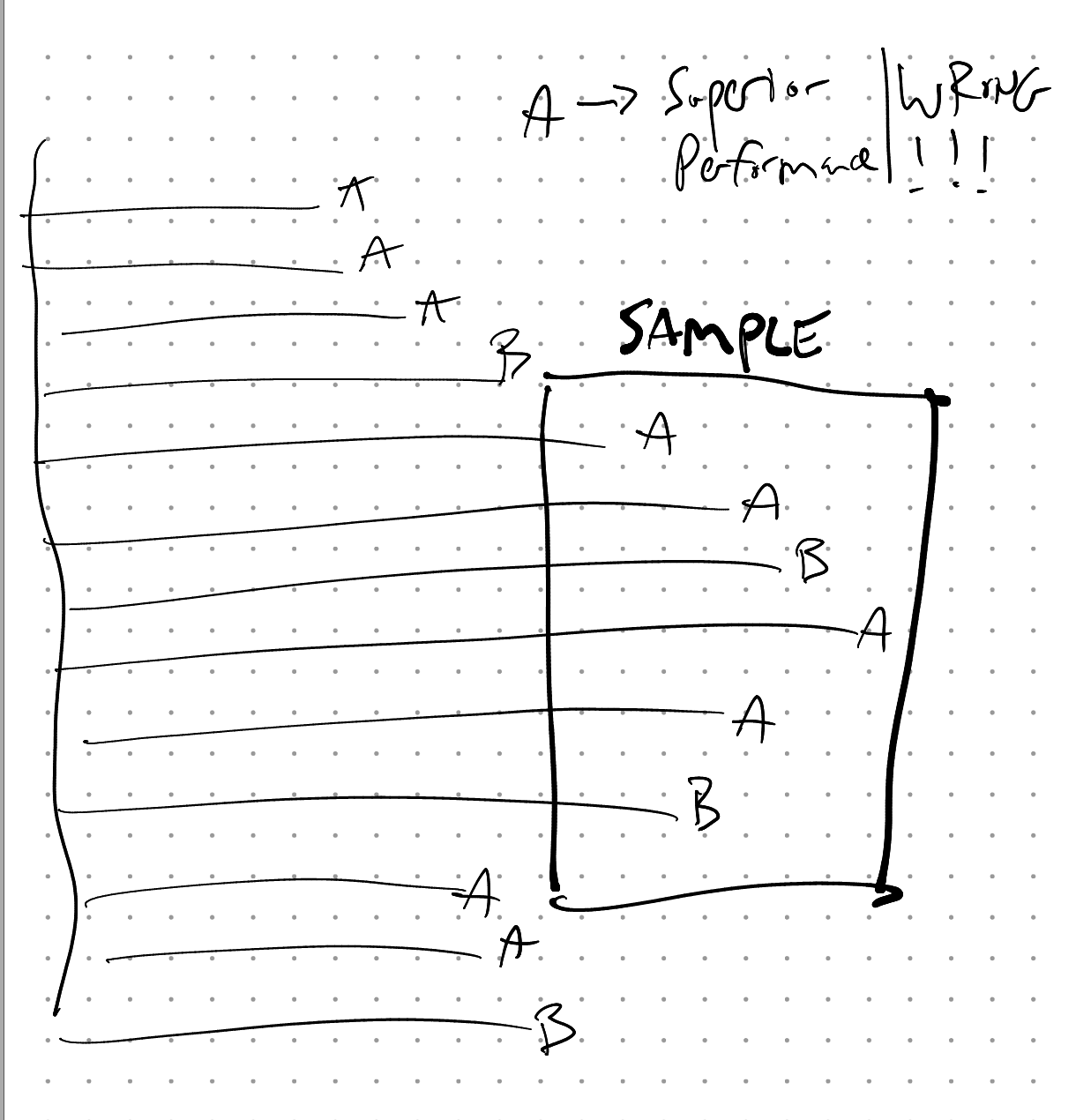 Then, we've studied just this sample and found that members of the sample either do A or B, but they never do both. (Like one flip of a coin -- you get heads or tails but not both.) Our measurement finds a lot of A. Twice as much A as B, in fact! That's yooge! Seems like A pretty clearly causes high performance!

Because of how we've sampled and measured things here, we do not notice that in the entire population, the following is happening:

If we try to understand why, we might do one of two things. One of these things is cheaper and faster than the other:

If A/B are subjective in nature and admitting to doing A is more socially desirable, we have another problem on our hands because it will create cognitive dissonance for people to admit to doing B. (Shorthand: A = socially Awesome behavior, B = socially Bad behavior)

Or what if, in reality, all 13 members of the system did both A and B, but when we asked them what they did, most of them had an easier time remembering A (you'll recall that A is socially Awesome behavior) and therefore bucketed themselves in the A bucket instead of the B bucket? Or what if we had asked the question in a way that forced them to choose between A and B when in reality they do both A and B?

The most accurate and honest things our researchers could say after they've done this hypothetical study on this radically simplified system are:

Again, reality is way more complex than this radically simplified system. In reality, as our hypothetical researchers report their findings they would also humbly gesture at the many potential factors their study does not consider and suggest how future research efforts might build upon their study's findings and these other factors.

I'm sure it's not a perfect piece of research, but it's a nice way to reflect on how the Halo Effect functions. It's also not a model for the kind of small-scale research that I advocate because it's longer and more expensive than we can usually manage.

80% notes and updates on my research into indie consulting and thought leadership; 20% shitposting about whatever. I share both process and results. Join up:

Updates when there are new articles about specialization, lead generation, and thought leadership; no more than 1x/week, usually less:

I'd love to hear from you.