I've always interpreted Van Morrison's T.B. Sheets as the story of a guy who breaks up with his girlfriend after she gets tuberculosis (oof. cold!). I was reminded of this after one of my wife's nephews got tuberculosis while visiting Honduras (he thought it was COVID, turned out to be TB), so I re-read the lyrics to the song.

The song's story is a bit more nuanced than dumping a sick girlfriend, but it is about impending death — perhaps of a friend and not a former lover — and the way that the feeling of death can choke the life out of a room.

It might be apocryphal, but some say Van Morrison broke down in tears after recording the song.

You can definitely see John Darnielle almost break down in tears as he sings about the death of a friend from cancer here: https://www.youtube.com/watch?v=mFpQQM1pfUc

What about the death of a market position? How does that go down?

Who cries for a dying market position?

(January 2022 update note: If you'd like to watch a video that does a good job of explaining the ideas below instead of reading them, you can do that here: https://www.youtube.com/watch?v=woi-WGnMN5c) 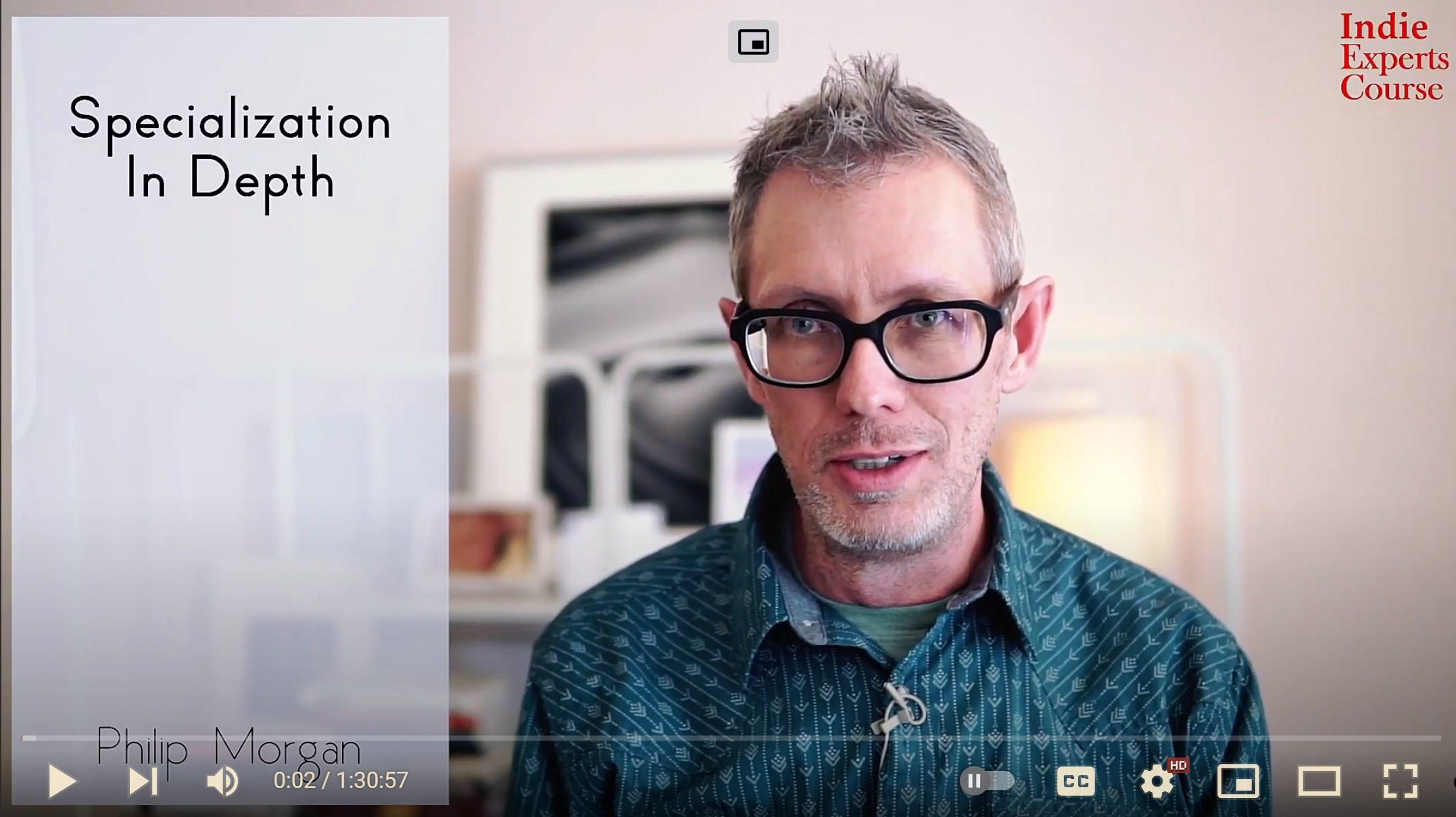 Generally, what we think of as the death of a market position is one of two kinds of changes: a precipitous drop in demand or commoditization. Only the first of these is an actual death. Commoditization is a change in market dynamics, yes, but it's not the same as death.

The word "platform" can mean different things to different people, but I don't have anything better to refer to the following group of things because, from a specialization perspective, they work fundamentally the same way. Platforms might include:

When platforms are new, it feels like — to quote H.I. McDunnough — the salad days.

Strong growth pulls platforms specialists forward in a powerful slipstream. A significant knowledge gap is created because the platform is new, hot, and attractive. The platform creator and platform ecosystem haven't yet produced a corpus of good documentation, robust best practices, or useful implementation guidance to fill that knowledge gap and as a result even mediocre content marketing gets discovered, consumed, and valued. Opportunity is falling off the trees, and platform specialists are living in the land of plenty. They can charge a premium for simply having arrived there earlier than the hordes of competition.

New platforms tend to attract service providers who lean towards the Innovator/early adopter end of the spectrum, and have a higher tolerance for risk and a higher ability to figure shit out. Whether we're talking about an individual or a team, we can think of this as a certain "business personality type". It is not an internally efficient business, but it is definitely the type you want to put on the job of figuring things out within a fast-changing domain with high uncertainty. This business personality type thrives within this kind of environment.

As platforms mature, a corpus of good documentation, best practices, or useful implementation guidance builds up around the platform. Unknowns get converted to knowns. Figuring shit out, which requires creativity and persistence and a tolerance for a certain kind of troubleshooting frustration, gets replaced with implementing well, which requires process and discipline and a tolerance for a different kind of frustration.

On the client side, expectations change. Clients no longer assume you just need to "leave the smart people alone and they'll figure it out." They assume that you should be able to know in advance how long things will take, and then produce results within that timeframe. They expect that if things are taking too long, something is really wrong with the competence of their vendor. They expect rigor in process, communication, and quality management.

This is what commoditization looks like. The unknowable becomes predictable. The custom becomes standardized. The chaotic becomes ordered. The unreliable becomes reliable.

In the abstract, commoditization is a very good thing for humans. It means that parts for the car you drive or the public transportation you use are standardized, and can be dropped into place in a few hours without a craftsperson taking weeks to build what would ultimately be a less reliable custom part. It means that you can replace the parts in a computer or home network without too much thought as to interoperability. (In fact, when is the last time you heard the word interoperability used! That's the beauty of commoditization: it makes so much complexity invisible.)

Commoditization is the figuring out of a new domain, and it's good because it leads to the ability to create higher forms of order.

I'm not an expert on cars or Tesla, but I honestly believe that if much of the componentry of automobiles hadn't already been commoditized (steering systems, suspensions, etc.), the custom engineering required for those systems would have been just enough of a barrier to keep Tesla from successfully innovating in the area of battery systems. Remember that Tesla's first car was an electric version of an existing "platform", the Lotus Elise. Tesla leveraged the fact that much of automobile manufacturing is commoditized to enable higher-order innovation on drive and control systems. Volkswagen is pursuing the same kind of commoditize-wherever-possible approach to the development of its electric drive system

Commoditization is generally good, but when it happens within a platform ecosystem, it is like an extreme version of climate change that dramatically alters the ecosystem. Members of the ecosystem will need to adapt or move or they will be harmed by the change.

Neither company is "better". Our world needs both kinds of companies.

Some companies can evolve with the platform ecosystem. They can "grow up in parallel with" the maturing, commoditizing ecosystem.

Those that can't will experience commoditization as a form of death. They will be like the ecosystem member that finds climate change destroying their habitat.

Switching platforms is costly. It's not impossible, but as the fine lines on your face start to develop into wrinkles and maybe the gray hairs start to accumulate, the physical and emotional cost of switching platforms tends to become less agreeable.

Part of the emotional cost is a longing for the bygone salad days. It's painful to remember a time when the platform was growing and felt vibrant and exciting. You compare the "good old days" of your platform ecosystem to its current commoditized reality, and the current reality doesn't feel as exciting. And frankly, it's not.

Another part of the emotional cost is the feeling of having to start over from scratch. In reality, you're not. You'll carry forward your professional network, your knowledge of how to run a company, how to earn visibility and trust, and other forms tacit knowledge. But still, there's an emotional cost.

The now-commoditized platform wants a different kind of company: A boring, disciplined, efficient, predictable implementation partner who can consistently produce quality at scale with low or moderate cost. And again, maybe you have or can become this kind of company. Maybe you're sick of figuring shit out and want a more consistent, "boring" work life.[1] Or maybe the momentum of the platform in its early days let your business increase headcount, and as you grew you needed to build in the kind of structure and discipline that makes your company a good fit for the now-commoditized platform ecosystem.

The pain of remembering the good old days and comparing them to the current reality can feel like a death.

Or, it can be a signal that there's an opportunity. Leveraging this opportunity requires fundamental change in your business. If you want to avoid the need for this kind of change, you will avoid or find a way to migrate away from platform specialization.

The second way a market position can die is a precipitous drop in demand. I should and certainly will write about this more in the future. For now:

When I have my positioning consultant hat on, I'm always going to warn you about the risks of platform specialization.

In the past, that warning would have had a pretty binary "just don't do it!!" quality to it.

I hope this more nuanced take on the topic helps you understand how to think about it for yourself in the context of your situation and preferences.

1: In this article, I needed to simplify by framing the figure-shit-out business and the quality-volume-and-low-cost businesses as polar opposites. In reality, it's more complex than that. I believe in and have invested the last several years in supporting a third kind of business that "stacks" figuring-shit-out activities along the axis of a specialization so that you get the best of both worlds: the leverage of specialization combined with the ongoing enjoyment of figuring new shit out all the time.

80% notes and updates on my research into indie consulting and thought leadership; 20% random stuff. I share both process and results. Join up:

Updates when there are new articles about specialization, lead generation, and thought leadership; no more than 1x/week, usually less: