Or, an argument for standards in thought leadership.

Question 1: There’s an old story about someone getting stoned for the first time and you see them staring at their hand, saying “wooooaaah duuuude, have you ever like reeeeaaally looked at your hand? So trippy…”.

Likewise, you can find someone new enough to a particular topic, or easily-impressed enough, that they think something like “culture eats strategy for breakfast” is amaaaaazing thought leadership rather than the truthy but commoditized and threadworn saying that it actually is.

Question 2: We can’t talk about anything of importance without considering context, so we need to ask whether there are contextual factors that are related to thought leadership. How does thought leadership change when the context changes?

Question 3: There’s a chance that if we make headway on #1 and #2 above, we can have a productive inquiry into the basic how question: how do you create thought leadership content or become a thought leader?

Thought leadership is the assumed pinnacle of marketing content, yet most of what I read about thought leadership for the indie consultant misses or avoids those three questions. Let’s face them head on, instead. It’ll be worth the struggle.

Let’s start with a working definition of thought leadership. If you pull the ejection seat lever on this article before it’s done, at least you’ll have that, though I think it’s worth fully engaging with our three questions.

Thought leadership influences or changes what a person or group of people — even an entire market — thinks about, or it changes how they think about something. There’s your working definition. 🙂

The amount of change that thought leadership seeks can’t happen in a single act; it needs a campaign of effort applied over time.

The amount of change that a person, group, or market will accept is defined by them and their circumstances, not by the thought leader.

That’s enough of a definition for now. Let’s tackle our three questions.

1: What Standards Must Content Marketing Meet To Be Considered Thought Leadership?

Thought leadership must meet these standards[1]:

Purposeful change serves… a purpose. It’s not change for the sake of change. Thought leaders are disciplined enough to build on what’s already good, not meddle with it merely to keep themselves at the center of a conversation.

Reasonable people can certainly — and always will — disagree about “what’s best for a person/group/market”. Thought leaders need skin in the game. Even with that, the coupling between thought leader performance and the performance or wellbeing of the group that they serve will never be tight, measurable, and causal enough that the thought leader suffers immediate gain/loss based on the quality of their thought leadership, so the coupling has to come from an ethical commitment to serving their market’s wellbeing. Markets and the institutions that serve them need to hold thought leaders to this ethical standard.

2) Makes a good-faith effort to durably influence or change thinking.

Thought leadership’s beneficial power comes from its ability to change thinking. Learning how to influence or change the thinking of a group of people is the work of a lifetime. The very idea that you could do this attracts a wild assortment of the very best and worst human beings.

Some people enter adulthood with a preternatural ability to earn trust from others. While this can be a part of doing effective thought leadership work, there is another part — the arguing for change part — that I believe requires experimentation and experiential learning. This article won’t teach you this part, but if you aspire to thought leadership it might be helpful to think about the specific places where you might focus your effort.

For example, what causes a business that the public admires? Is it actual business performance, the stories that are told about the business in the press, a survivorship effect, or something else? This is an example of an opportunity to argue for a certain cause-effect relationship and then articulate the implications of that cause-effect relationship. If mere survivorship, for example, is what causes an admirable business, what are the implications for those who want to build businesses that the public admires?

b. What business practices are currently considered positive or normative, and where are the opportunities to increase wellbeing by changing those practices?

For example, are command-and-control, leaderless, or hybrid management practices the best route forward into a changing future? If you believe the relatively new leaderless practices are the best equipment for this journey, will you argue from data, vivid shared experience, or some amalgam of the two?

c. What is your market’s working understanding of the relationships between specifics and the surrounding context? Is this understanding serving their wellbeing?

For example, COVID forced a lot of people into relative isolation for a relatively long period of time and was disruptive to supply chains. Is this something that retailers need to respond to in a specific way, wait for the good ole’ pre-pandemic days to return, or something else?

d. How are decisions are made in your market? Is there a healthy or unhealthy reliance on experience, data, etc? How does a cultural emphasis on group consensus contribute to or interfere with effective decision making? What evidence would you bring to bear on this discussion, and would that evidence be most persuasive if it comes from within your target market or outside of it?

e. What does your market think is important or worth further investigation, and would changing that agenda contribute to your market’s wellbeing?

For example, the center of gravity of Silicon Valley tech business models seems to be pure software zero-marginal-cost businesses. A thought leader who sees an opportunity in applying software to physical world problems (ex: climate change) would have their work cut out for them, and that work would look like proposing an agenda that emphasizes the market thinking a lot more about the opportunity they see.

f. Thought leadership work might look like providing more useful models, or ways of thinking about or solving established or common problems.

For example, Simon Wardley proposes what he sees as a more useful method for arriving at effective strategy decisions: value chain mapping.

A – F above are specific ways in which a thought leader might work steadily over time to durably change or influence how their audience thinks about things. The element of time is also important.

If you planted an oak tree sapling and it wasn’t full grown within a week, would you give up in disgust and stop watering it?

Thought leadership is growing an oak tree, not duckweed (which is apparently one of the fastest-growing feedstock plants).

A thought leadership campaign doesn’t have to be totally planned out. You don’t even need a content calendar. What you do need is to commit to a 5 to 10 year-long campaign of advocacy for the wellbeing of those you serve, articulated through the vehicle of your thought leadership work, regularly delivered and re-delivered to the market.

2: How Does Context Influence Thought Leadership? 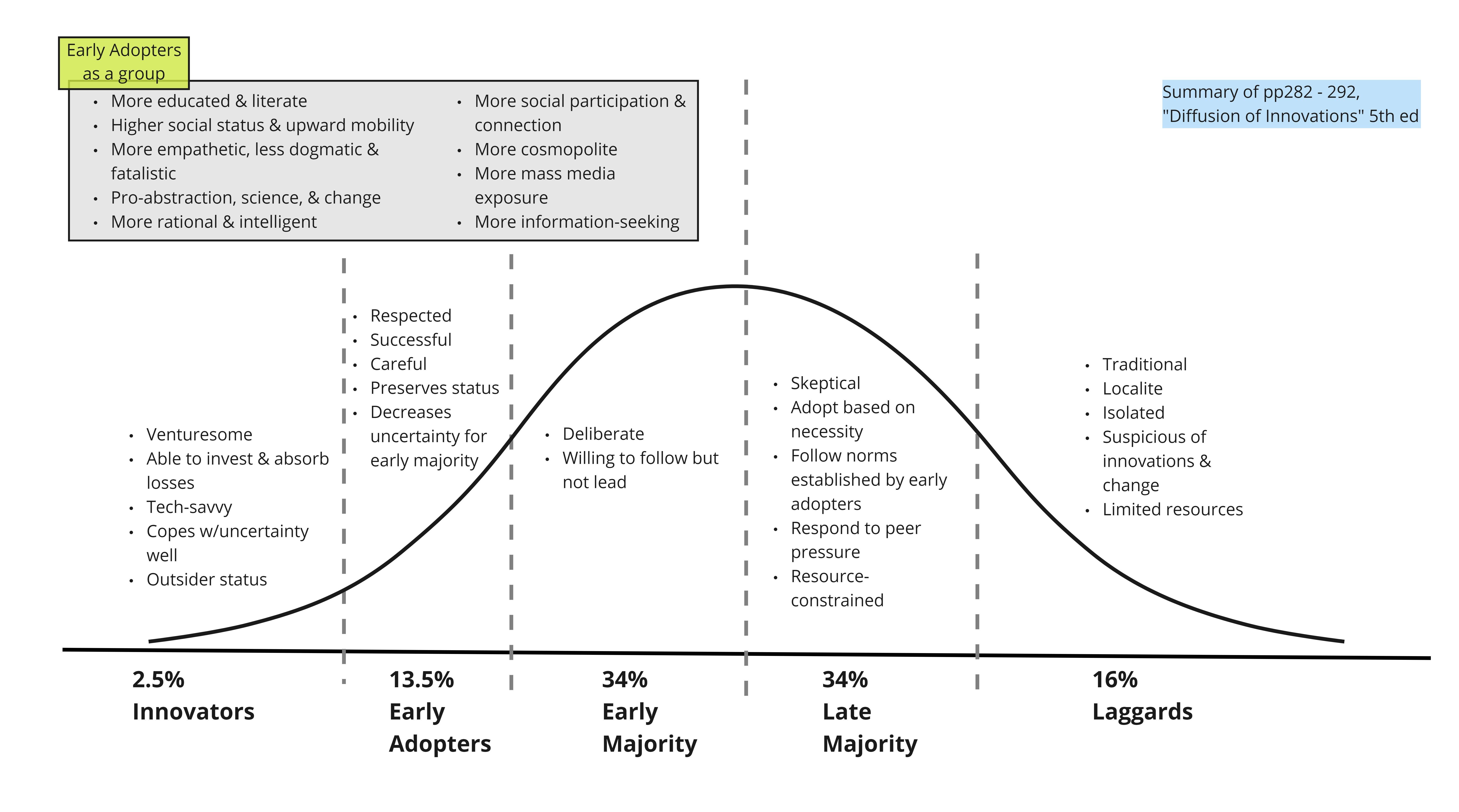 (Big ole zoomable PDF version of the above: https://drive.google.com/file/d/1B_T6Mz30MkOeR0q3fmmXvOdDkkT9L4f1/view)

Can thought leadership happen in all 5 of those quintiles? I think so, and this is at least a partial reversal of something I’ve gone on record with previously.

Let’s think about how context might drive your thought leadership approach within 3 of these 5 Rogerian quintiles by asking some context-appropriate open-ended questions:

The Rogers curve is not a perfect way to think about context. The Cynefin framework, for example, proposes a viable alternative.

Thought leadership isn’t a firehose of 200-proof expertise aimed at whoever will listen, and it isn’t thinking divorced from action. Thought leadership helps people respond to changes in the larger context — changes they may not see coming, understand, or like.

This is probably the point where you start wondering whether thought leadership work is “worth it”. That makes this the point where I insert my favorite quote from Ronnie Coleman.

But if you crave positive impact and don’t immediately need the money, thought leadership is a fascinating job you can volunteer for.

Ordinary people can do it, including you.

Oh… how do you become a thought leader?

After doing the thinking and re-thinking needed to feel OK about publishing this, I can easily see why so many who have taken a stab at defining or explaining thought leadership have stopped short of tackling the questions of standards and context. These questions add complexity and nuance to the discussion, and they make a simple-seeming topic more challenging.

But if you’re seriously considering creating thought leadership content or becoming a thought leader, then you’re up for that challenge, aren’t you!

1: Regarding the standards question, notice how I’ve framed it. The pure direct response marketing response to this framing would be: “You’re missing the point. The point of marketing is getting a response that ultimately helps you sell something, and so if a 5×7 photographic print of a Postit note saying ‘thought leadershp’ adhered to a turd gets the desired response, what’s the problem?”

I am, to be perfectly clear, arguing that marketing should live up to standards, and those standards have nothing to do with whether the marketing produces a good or bad response.

You could argue that this is an undue burden; that marketing is hard enough without having to live up to additional standards beyond whether it works or not. I disagree, but I think I understand how you could come from this perspective. You could, for example, imagine a linear process by which a stranger becomes aware of your services and ultimately becomes a client and you could further imagine that you apply your standards once, during the sales conversation, or that your standards of excellence are on full display during project delivery, but not during the marketing that precedes that sales conversation or delivery. I think doing this is similar to dumping pollution upstream into the river that feeds your town’s drinking water and then hoping water treatment will remove the pollution, but again, if your basic worldview is that marketing is hard enough as it is, then I understand the justifications you might make in our hypothetical example here.

Also: I don’t want to downplay that it’s awesome to help even just one person, and if that person is a beginner whose world was rocked by your not-up-to-standards thought leadership, that’s great! But we can’t just keep lowering the bar until any old thing gets to be called thought leadership, and so we can’t set our standards based on what the beginner thinks.